Getting caught up in someone else’s relationshit

So I’d been hanging around with Joe and Flip for a about a year. I managed to find ways to get really freaking stoned. My mom had got a prescription for Tuinals from her doctor to help her sleep. I just happened to see them in our bathroom one day and I remember Snake’s PDR book and how Snake had said that any drug ending in a Nol or a Tol was a downer or (Barbiturate), so I started taking a few at a time and selling them th Joe,Snake and Flip for some weed, sometimes I’d use them for myself.
Mom’s capsule supply was getting low, so I had to dream up a way to at least get the powdered drug out of the capsule. I came up with a half assed plan to replace the drug powder with baking soda and gently reassemble the capsule, sometimes it worked and sometimes it didn’t work. We would snort the tuinal powder and chug beers and or whiskey.

Stuck In The Middle, Thank you very much

Kirby dropped out of high school in 11th grade to go work for Ford Motor Assembly Co. car division, all the men in his family worked at that plant. Kirby put air conditioners in cars as they rolled down the assembly line. He was on the afternoon shift that started at 2:30 pm and ended at 2:30 am, Kirby missed out on a lot of our partying, by the time he got off work we were all fucked up and wasted. Kirby and I became really good friends, he trusted me so much that he asked me to watch over his girlfriend Judy while he was at work. So I did as he asked, it turned out that Judy and I were inseparable partners in crime, we had a bunch of friends that we went to school with and we hung out them after school as well. Kirby would take a day or 2 off from work sometimes, then about 6 of us would walk down to the river bank of the Rouge River that ran through town and buy some cases of beer on the way down. I would have a bag of weed and some papers. We would build a small bonfire and sit and drink and smoke until sunrise then next day. Kirby would call in to his work and tell them that he broke his arm (he really didn’t) then after he hung up from the call he’d ask “Gordie, will you help me break my arm?” the first time he asked me, I was a bit shocked, but I did it. I put his arm on the curb of the street that ran along side my house, placed his elbow on the road and laid his forearm out flat on the pavement. I got in my car and rolled over his forearm slowly, Kirby screamed, I got out and asked him if he wanted me to back over it and he shouted NO!. I then loaded Kirby and Judy up into the car and drove them off to the hospital Emergency room. Kirby came out 2 hours later and I was astonished when he told me that all that work and it hand only crushed the muscle in his forearm. 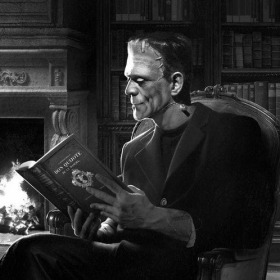